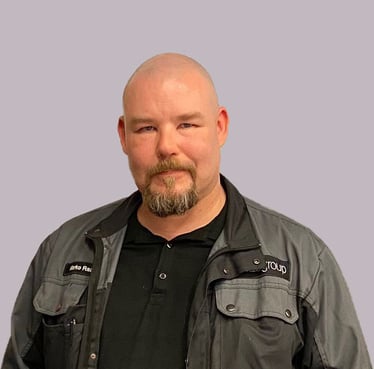 Marko Raski wants to keep on learning – not only for the sake of himself and his work but also for the future of his children and grandchildren. Oras Group has provided him with plenty of opportunities to do just that.

Process technology manager Marko Raski has a straightforward motto to live by: knowledge fades, but learning is forever.

“It’s a slogan that describes not only modern working life but also my career,” he explains. “Things happen and develop so incredibly quickly that sometimes what you learn today is redundant tomorrow. That’s why you have to keep on training and teaching yourself.”

This is, indeed, what Marko has been doing, and he’s got a lot to show for it. Although he’s spent his entire adult life – almost 27 years and counting – working for Oras Group in Rauma, Finland, he boasts an abundance of experience from a wide range of roles. He started at the company as a 21-year-old summer worker fresh out of the army, and the most recent change in his job title happened in March this year.

“For us, job titles don’t really make a difference”

Having started out in the production line in manual grinding and moving on to working as a setter, educator of robotics, production foreman as well as in various supervisory and managerial positions, Marko’s responsibilities have grown hefty in the nearly three decades. Currently, he’s in charge of the efficiency and quality of the operative processes in production and introducing investments and new product projects in the Rauma factory, which specialises in composite materials.

As Marko’s been climbing up the career ladder, he’s had a say in the way work has been organised, so the practical experience has been a huge plus. Sometimes he’s ended up being a boss for his previous teammates. This has never caused any tension, which is partially thanks to Oras Group being a great believer in somewhat flat hierarchies.

“For us, job titles don’t really make a difference. It’s trust and your skills that matter.”

On top of his impressive work experience, Marko has also studied while working. His most recent degree, bachelor of mechanical and production engineering, is from 2018.

Marko is thankful for how supportive his employer has been, as he was able to spend a part of his working hours on his studies. He would also have been allowed to take extra leave, an opportunity he appreciates but didn’t take advantage of.

Global sustainability at the core

Having been born and raised in Rauma, Marko’s career might sound quite location-specific. However, as Oras Group operates internationally, most days Marko speaks English instead of his mother tongue, the distinctive Rauma dialect in Finnish.

Like the job, also its impact on the world is global. Oras Group sees its employees as ‘Creators of the Perfect Flow’, and as a father of three, Marko deems this one of his main drivers.

“If we don’t seriously consider our impact on the environment, I can’t help but think what the world will look like for my children and their children.”

Oras Group is currently preparing a significant investment in a new plating on plastic line in Rauma. Marko points out that the new plant is built for decades to come, which means there are also various environmental aspects to be taken into account in planning, ranging from water and energy consumption to thermal energy storage.

“To us, sustainability isn’t just about the life cycle of our products but also our production processes,” he says – and adds that this takes creativity and innovation. “Seeing things that don’t even exist yet is at the core of our work.”